These shots are slightly out of focus, but they show the other views of the sculpt posted below, so I figured people might like to see them. I took these shots with a Minolta point-and-shoot camera, in black and white film, then scanned them in colour.

The model, Niko, is a latin dancer who performs from time to time at Lula Lounge in Toronto. I think he'd been dancing till late the night before, because he'd come in to our Saturday morning classes and sit for us and look more and more sleepy as the session wore on. I think he was a good model, sleepy or not. 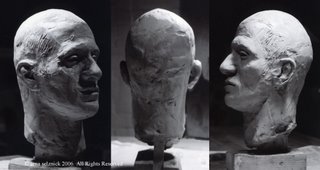 I did this two years ago in a sculpting class at the Toronto School Of Art. The model's name was Niko. I think I spent about four, three-hour sessions on the piece. He's just a little smaller than life size, made with Tucker's low fire white clay.

After I took this shot, I cut the head in half and hollowed it out. Then I put the head back together. He's been lying around since then, because we had no facilities to fire him. Now, I'm hoping to finally see it finished. A kind instructor at Central Technical School offered to fire him! Can't wait to see how he turns out... 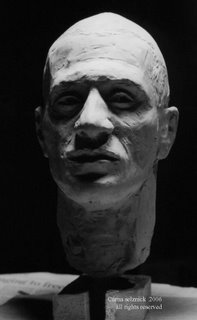 Bloor in black and white...

I noticed after posting these images, that there are almost no people in them. I took these on the first night of Passover and the street was kind of quiet. Dunno if that's why it was quiet.

The intersection of Avenue Road and Bloor Street:

The work on the Royal Ontario Museum in Toronto as of last week: 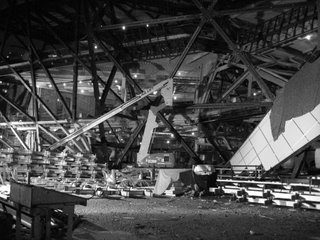 A walkway near the museum on the same night: 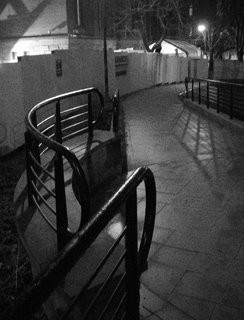 Pay phones on Bloor near Spadina: 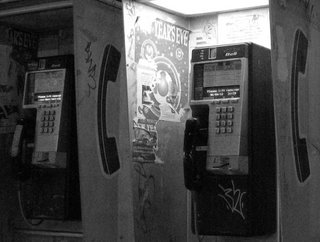 Psychic reading, anyone? The handwritten sign on the door reads: "People wanted to deliver flyers full time. Apply within." On Bloor Street, between Spadina and Bathurst: 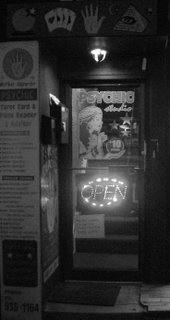 This first one I drew in my parents living room in the summer of '79. The T-shirt is from the Robert McLaughlin Gallery in Oshawa, where I'd worked the previous year. The image on the shirt is by the Canadian artist Dennis Burton. 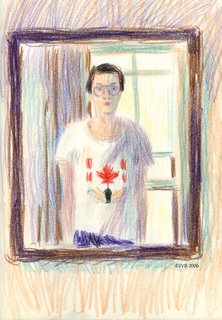 This second one I drew from a photograph my dad took of my friends and I as we were clowning around at my cousin's bridal shower. At the time, we had a 'punk' band called The Clumps. We were a true punk band in that only one of us -- and it wasn't me -- knew how to play an instrument. Can anyone recognize the painting behind me? 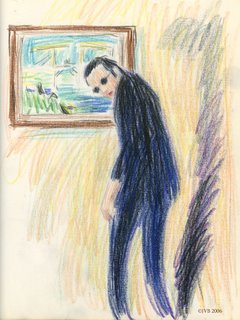 Time for a change. Different colours, and a banner! With art that was actually done in the sixties!! It's kind of a throw back, yet...NEW!!! You're welcome to tell us what you think of the revised look. Like it? Hate it? Don't care?

We appreciate the feedback.

A & J.
Posted by the doodlers at Monday, April 03, 2006 18 comments:
Email ThisBlogThis!Share to TwitterShare to FacebookShare to Pinterest
Labels: blog, design

Just for fun, here's a quick doodle in Flash. Saw this dog today waiting for his master to finish shopping. I did a few variations that made me think of kids room wallpaper. 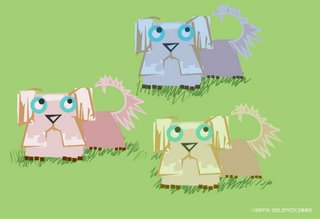 And this one is a photoshoppy dog border, also a kids room sort of thing.