These are two self portraits done the same summer as the previous posting, before I left for a year long trip to Florence.

I'm pretty sure I created the background texture in this first one by making a rubbing from the sidewalk in front of our house in Oshawa. Obviously, I was influenced by the drawings of Edvard Munch... 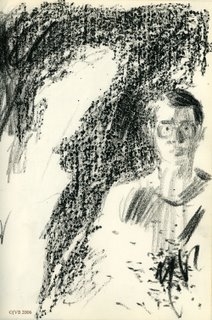 The' explosion' from the top of my head is actually a rubbing from a silver serving tray found in my parents' kitchen. If you look closely you can see the image of a tulip. 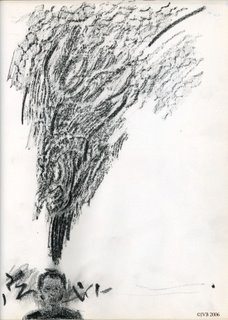 Both drawings are done with conte in a sketchbook. Posted by John.
Posted by the doodlers at Tuesday, March 28, 2006 6 comments:
Email ThisBlogThis!Share to TwitterShare to FacebookShare to Pinterest
Labels: John van Bruggen, portraits, rubbing, sketch

Not quite "The Scream." This drawing is one of a series of self-portraits I made the summer I worked at General Motors, in anticipation of spending a year painting in Florence. The setting is a bridge in Camp Samac, a short walk north of my parents' place in Oshawa. We will post more from the same sketch book over the next few days. 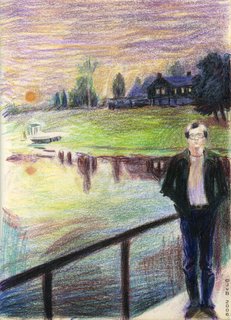 I had a teenage crush on Eric Bruhn. He was an international ballet star and his appearances in Toronto, dancing with the National Ballet of Canada, caused a sensation. As a kid, I took ballet for several years and briefly fancied that I might become a professional dancer. I didn't have the dedication. However, learning ballet helped to sharpen my awareness of body movement, physicality and drama, which can come in handy when working in the animation biz.

Around 1984, I was doing some banking in the St. Lawrence neighbourhood of Toronto next to the National Ballet, and Eric Bruhn came into the bank. By then he was Artistic Director of the National Ballet of Canada, headquartered next door. I stared. He asked me for the time. He was smoking a cigarette. (of course it used to be legal to smoke in public places in Toronto) He stood up close, getting in my airspace. I could see the many fine lines that long-time smokers have. He wore a pale leather trench coat, long, below the knee. Faun colour. An unusual coat. I was surprised that he was smaller than I expected. He had a large head. I was thinking all these things, mentally cross-checking my in-person impression of him with my cherished teenage fantasy image, I guess. The moment passed quickly. I wanted to say how much I admired his dancing. Instead I stood stunned and told him the time.

Below is a mock poster I made, a year or so after I saw him dance in Toronto, before that meeting in the bank. As you can see in the sketch, he had a rather heroic profile. The photograph I took the likeness from was printed in the Globe and Mail. In the original photo, Mr. Bruhn was gesturing towards another dancer during a practice session at the National Ballet. I'd like to see the photo now, and compare it to this sketch.

I don't know the significance of the odd time posted on the poster. I was probably just trying to fill up the space.

Pen and brush and india ink. 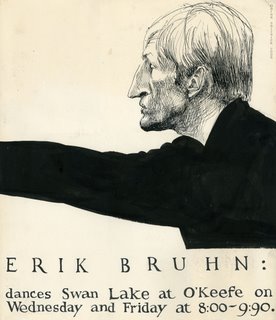 Through the back window at dusk... 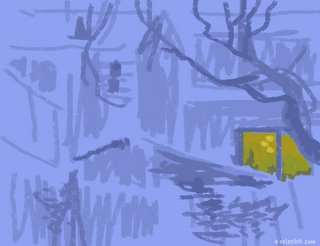 A quick sketch with very basic Photoshop brushes. I'm trying to capture the colour that lasts for a few moments late in the afternoon.