Our weekend in Ottawa was cool, man... 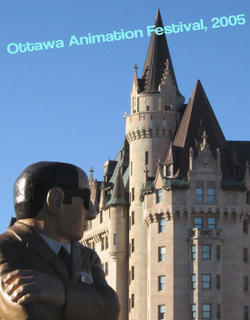 The weekend of September 23 we went to the Ottawa Animation Festival, where we saw a remarkable number of fine animated films, and gave our new point-and-shoot digital camera a workout. Check out our little photo essay on the trip here.

What follows are some of the highlights of the weekend screenings. Yes, we were, as Artistic Director Chris Robinson joked with a air of mock disdain in his voice, 'weekend pass holders'. Maybe next year we'll go earlier and actually get to the animators' picnic for the first time!

First of all: Gotta give a nod to the guys who did the SIGNAL FILM that opened every screening. Nine separate animated storylines all played at once. At the start of each screening you could pick a new character to watch as he or she traveled by horse, car, bus, parachute etc... to the Animation festival where they all ended up in the theatre together! The SFX played all at once too; a cacophony of crashes, brake squeals, and animal noises that rose to a crescendo. Great fun.

Since our film, COOLMAN!: HOOTCHY KOOTCHY HAIKU was part of short competition # 4, on Saturday festival organizers asked us to sit in the 'Queen's Box' along with the other filmmakers during that screening. After our film, they announced our names and we waved beatifically to the audience below. Nice tip of the hat to the creators who were there. HOOTCHY KOOTCHY looked good and sounded great and got some laughs from the audience. We liked hearing the dignified announcer say 'Hootchy Kootchy Haiku' in both French and English. And as an added bonus, almost every film in short competition #4 was excellent. Favourites included:

Shows you just what a guy can do on his home computer: Xploding Plastix ‘Joy Comes in the Morning’ [2005] Scott Friedman & Joe Ledbetter

An ironic story about a pair of caged parrots who know too much: Dying of Love (Morir de amor) [2004] Gil Alkabetz


Some favourites from other screenings:

Pee-wee Herman's Playhouse Animation Fresh, funny and groundbreaking, it looks like it was made yesterday.

The very odd and wonderful: Piper the Goat and the Peace Pipe [2005] Lev Polyakov (Lev gave the best acceptance speech/happening on closing night)

From Sheridan College, a little creature is looking for a missing piece: An Eye for Annai [2005] Jon Klassen & Daniel Rodrigues

Great adventure story and strong visuals: The Mysterious Geographic Explorations of Jasper Morello[2004] Anthony Lucas (we think this one should have won an award!)

A wry delight: The Back Brace [2004] Andy London & Carolyn London

Morose and funny at the same time: DogWorries [2005] Chris Armstrong

Hilarious television series that won in our competition category TV SERIES FOR ADULTS (deservedly so): Harvey Birdman, Attorney at Law ‘Birdgirl of Guantanamole’ [2005]

Hypnotic: even odd even [2004] Barbara Doser

Best Promotional Work, and our choice for best use of props: Coinstar ‘Shoe’ [2004] PES

We missed Mole in the City [2005] Roque Ballesteros, which won an award for Best Animation Made for the Internet, but, we'll check it out soon on...the internet, of course.

The Moon and the Son [2004] by John Canemaker; a compelling personal story but seemed a bit long.

Missing from the festival this year: A solid feature film premiere. Where were CORPSE BRIDE and WALLACE AND GROMMIT?

Sunday morning's highlight was definately a masterclass by the elegant, articulate Michael Dudok de Wit, moderated by the NFB's Michael Fukushima. More about his talk soon!

Sunday afternoon, saturated from so many screenings, we visited Ottawa's National Gallery where we took in the Forty-Part Motet, Janet Cardiff's sound sculpture (playing until January 2006). If you are planning to be in Ottawa do not miss this! Inside the gallery you wander past a skylit indoor garden and enter the reconstructed 19th-century interior of Rideau Chapel. There are 40 speakers facing the centre of the space and two benches in the middle of the otherwise bare room. Polished hardwood floors, delicate fluted columns and arches create an atmosphere of spiritual calm. Then the voices start. At first you hear coughing and a bit of chatter as each participant of the choir warms up. They begin to sing. Each voice was recorded separately but they blend as though all forty of them are standing in a wide circle around you. Gorgeous and moving!
Posted by the doodlers at Sunday, October 09, 2005
Email ThisBlogThis!Share to TwitterShare to FacebookShare to Pinterest
Labels: Animation Festivals, Coolman, photography